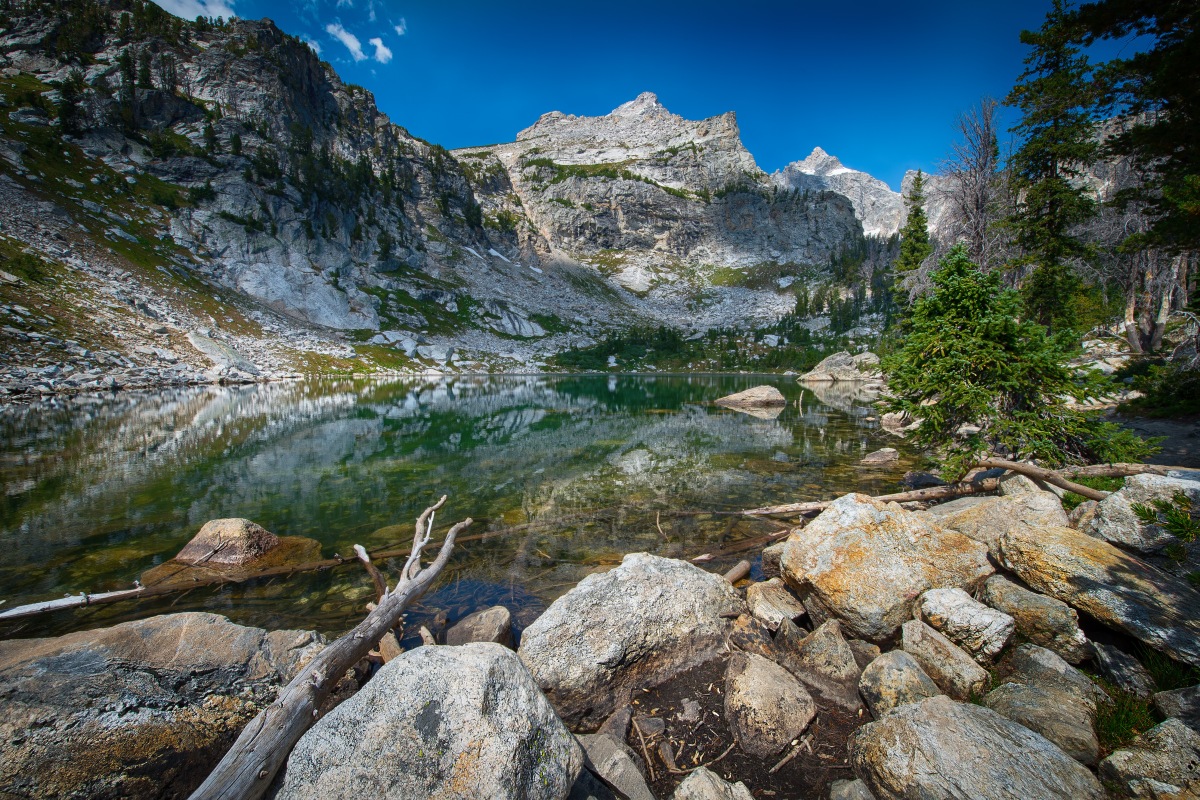 One of my favorite hikes in the Tetons this year and the most difficult (for me anyway) was hiking the Amphitheater Lake trail out of Lupine Meadows. The hike is about 10 miles round trip with a 3000 ft elevation gain. Both Amphitheater Lake and Surprise Lake sit close together, one above the other at about 9600 feet. If you don’t plan on spending the night on the mountain you will want to make an early start up the trail.

On this trip I traveled alone and was very careful about my preparation. I had my backpack with high protein and high carb snacks, plenty of water, camera gear, bear spray, map, compass, binoculars, survival gear, first aid  kit, trekking poles and cell phone with portable charger. I also made sure my family new exactly where I would be and what time I would return. I have found that in most areas of the Tetons I have some cell phone access. So it is great that I can give some updates as to my progress to family members who might otherwise worry about me.

I arrived at the Lupine Meadows trail head just before sunrise. To get there I drove from Jackson to Moose Junction then through the Park’s south entrance past the Taggart and Bradley Lakes trail head. Then I took a left at the Lupine Meadows turnoff (midway between Taggart Lake and Jenny Lake parking lots). From there its about 1.5 miles of dirt road to the trail head parking area. Just before I reached the Lupine Meadows turn off while it was still dark I saw some movement ahead of me on the road, slowed and stopped as a large herd of elk crossed the highway. This is not an uncommon sight as many mornings I am on the road before daylight and I am always on the lookout for wildlife. Such a beautiful sight watching these large animals at close range silhouetted against the lightening sky. After they crossed the road I moved on, briefly took my eyes off the road to glance at my phone screen’s map (I have my phone mounted on the dashboard) and saw in my peripheral vision a large porcupine in my headlights. I wasn’t driving very fast so was able to stop in time but everything in the passenger seat ended up on the floor. Shortly after moving down the road again my eyes starting watering and I began gasping and sneezing and noticed a strange peppery taste in my mouth so pulling over I rolled my windows down and opened the door. I then got out walked around to the passenger side door opening it and checked the items that had fallen on the floor from the seat. That’s when I figured out what happened. Among the items that had hit the floor when I slammed my brakes was my bear spray which had briefly discharged when it hit the floor! I kept the windows down while I drove the rest of the way to the trail head. Lupine Meadows sits right at the base of the mountains and it is a beautiful place filled with lush grass and wildflowers.

STARTING MY HIKE UP THE AMPHITHEATER LAKE TRAIL

When I could see well enough to begin my hike I donned my gear and headed up the trail. This trail can be busy in the morning. It’s the only trail in the park that heads directly up the face of the Tetons. I saw early morning trail runners and saw several people with climbing gear on their backs. Mountain climbers use the trail to reach Garnet Canyon and then climb the Grand Teton and other nearby peaks.

The first quarter mile of trail was the easiest, traveling along the length of the meadows with the sights and sounds of Sandhill Cranes and other birds in the marshy area of the meadows. Then the trail turned towards the mountains and a steady climb to the 1.7 mile mark where the trail forks south towards Bradley and Taggart Lakes or straight up the mountain toward the Garnet Canyon junction. From this point the trail begins switch-backing across the mountain’s face gaining altitude at every turn. By the time I reached this first fork I was already feeling some fatigue and set a goal to at least reach the next fork to Garnet Canyon which would be the 3 mile mark. I find that on difficult hikes I do better if I cover the distance in stages. Setting a goal to reach the end of the first stage, stop, drink water, let my heart rate return to normal, check my surroundings for photo opportunities then move to the next stage and do the same. This works great especially on really long sweeping switchbacks. As the trail crosses the mountain’s open slopes there are some beautiful views of the peaks above and the valley below.

Bradley and Taggart Lakes can easily be seen from many parts of the trail. I saw deer many times while hiking. Some on the slopes, some at the edge of the trail near springs and I even had a couple of mule deer fawns walk down the trail to within a few feet of me stop and check me out showing no fear. I also saw a female Ruffed Grouse on a log beside me paying me little attention as her babies walked around and between my legs as I stood there. So cool!

By the time I had reached the 3 mile point at the Garnet Canyon Junction I was tired and winded as I contemplated the sign that read 1.7 miles to Surprise Lake. At this point the switchbacks are still quite long and sweeping and seemingly endless but I knew I could make it the rest of the way if I took my time. At the end of the next switchback I could look north and see portions of Jenny Lake and Jackson Lake.

In the photo above you can see the slight haze in the distance. There were several fires burning in Wyoming that made the distances hazy but not bad enough to affect the air quality. Really not noticeable at all while hiking up the mountain.

The last 1.5 miles of switchbacks are steep and less sweeping and my progress slowed way down as I struggled up the last steep climb and into the Surprise Lake area. It took me almost 5 hours to hike the 5 miles into this area. That was disappointing to me because I felt like I was in better physical condition then that. There were times coming up the trail with my heart pounding in my ears that I physically could not go another step until I had rested, watered and got my breathing and heart rate under control. Then I would look up the trail a ways to the end of the switchback and tell myself “I can make it that far”and then do it all over again with the knowledge that “I’m almost there!” So instead of being disappointed at how long it took me to get there I congratulated myself for not giving up and turning back and for pushing through even though it was very difficult for me.

The Surprise Lake area has been popular since the 1920s when groups on horseback rode in here to camp while on their way to visit the Teton Glacier, just to the north. The first lake you come to is Surprise Lake just off through the trees to the left of the trail. Not sure the reason for it’s name but the first thing you see are the trees. Majestic Whitebark pines grow around the lake. Through the trees is your first glimpse of this pretty subalpine lake.

What’s interesting is that Amphitheater Lake is about .25 miles up the trail, another 100 feet in elevation and is considered an alpine lake. Both lakes straddle the border between alpine and subalpine environments and sit in cirques carved by glaciers. Elevation at Surprise Lake (below) is 9580 feet.

After spending time taking photos and looking around Surprise Lake I put my gear back in my pack and headed up the trail to Amphitheater Lake climbed over the ridge and spread before me was one of the prettiest lakes I’ve ever seen. Surrounded by high peaks, Disappointment Peak directly in the background and Grand Teton behind that, Amphitheater Lake sits a little higher up then Surprise Lake at an elevation of 9698 feet.

I spent about an hour and a half at this lake just drinking in the spectacular views, taking the occasional photo as the light changed and glassing the cliffs for mountain goats. I felt I could have stayed there forever. As I ate my lunch sitting in the grass leaning against my backpack I had chipmunks in my lap eating crumbs from my fingers while listening to friendly folks chatting about the area and the scenery. One couple who just arrived said they had just seen a bear cub a couple hundred yards back on the trail. Of course my first thought was “Uh oh where’s it’s mom?”

On my way back down the trail I ran into others who had seen the cub near the trail. A couple hundred yards further down as I rounded a bend I looked over the edge and saw down below the trail a good sized black bear. She or he was tearing apart a log for the purpose I assume of getting at the little critters living inside. I didn’t linger but continued at a steady pace down the trail and out of sight. I ran into quite a few people coming up the trail and I warned them about the bear advising them to “be bear aware” and make plenty of noise. It was interesting the different responses I got. Some were worried because they didn’t have bear spray. Others unconsciously put their hand on their belt to make sure their bear spray was there and a few were very excited and said they hoped they would get to see the bear!

Obviously the hike down was much quicker and easier in some ways then the hike up. But hiking down hill is hard on the joints, especially my knees and hips. I always take trekking poles with me. They are great for helping me keep my balance stepping over obstacles and climbing steep areas of trail. I also bang them together at times to make more noise going up the trail. But where they benefit me the most is going down hill. It took me two and a half hours on the return trip and if it wasn’t for my poles taking the pressure off my hip and knee joints I don’t think I would have made it back to the trail head without emergency assistance.

So…to summarize this adventure of mine. I do look at this trip as an adventure and a great outdoor experience. Yes it was tough on me at times. But I found out just how far I can push myself physically. I was able to go home and recover just fine. It took a few days to get over being stiff and sore. But looking at the photos I captured, remembering the wildlife I saw and the awesome majesty of the mountains, spectacular lakes and sweeping views of the valley makes it all worth it and it will be remembered as one of my favorite hikes. I can’t wait for the next adventure!